Youth In Action Groups Teach About Dangers of Tobacco Use

During the past few weeks, “mad scientists” have visited community events across Garrett County, sharing their findings about the dangers of tobacco use. The skit has been performed in Accident and Oakland.

The goal of the skit is to discourage youth (or anyone) from using smokeless tobacco products, or to convince anyone who is already a user to kick the habit.

The actors, students from the Youth in Action Teams, add the various components of smokeless tobacco (actually harmless items representing those not-so-harmless components) to a blender one at a time: tobacco, lead, benzene, arsenic, formaldehyde…

“But, Big Tobacco doesn’t stop there,” the scientists exclaim. “They add another 15 to 20 ingredients. Some we know about and some we don’t, because they refuse to tell anyone what other ingredients are included in spit tobacco.”

Of course, the scientists remind the audience, the last ingredient is “…nicotine! It’s not bad enough that all those dangerous chemicals are in spit tobacco. No, Big Tobacco has to hook you on it so they can slowly rot out your gums, throat, cheeks and mouth.”

The nasty mess that comes out of the blender is enough to make the audience gasp, as does the fact that almost as many kids in our high schools are using spit tobacco as they are smoking cigarettes.

But the skit ends on a good note, as the scientists finish with, “But….remember this….most of us don’t use any type of tobacco. In fact, 4 out of 5 Garrett County high school students don’t have anything to do with spit tobacco.  They’re smarter than Big Tobacco. Make sure you are too!”

Attendees are encouraged to visit the Garrett County Health Department’s KickingTobacco.com website for more information or to sign up for free cessation classes. The classes are good for users of any nicotine delivery products, including cigarettes, cigars, chewing tobacco, snuff, or any e-devices. For more information call the health department at 301-334-7730 or 301-895-3111. 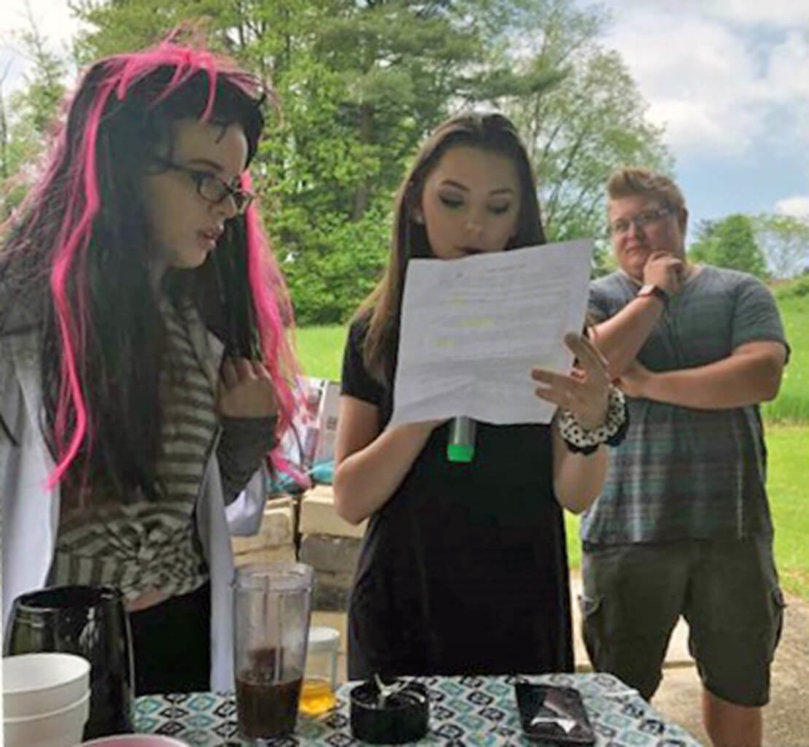