In this column we highlight Garrett County and the Deep Creek Lake, MD area. We provide short writings on its people, places, and opportunities from an “insider” perspective. Typically, the articles will be authored by Deep Creek Times Owner Sarah Myers.  We also welcome submissions from members of the community and visitors.

Feast in the Local Forest

Growing up in Garrett County, Maryland, there are just some things you take for granted. Like, for example, the wild ramps and morels that can be found throughout the spring each year.

First, and well before the last snow fall of the winter season, ramps begin popping up in small patches. You may not have heard of ramps before but, basically, they look like a scallion. Well, not really. But start with a scallion and widen and flatten the green leaves that grow above ground. Then, in the ground is a smaller, sort of oblong white bulb. That’s a ramp.

They have a very strong and unique flavor that can be overwhelming for some. It’s one of those accoutrements that you’ll either love or hate. Historically, it was one of the first vegetables that was eaten after a long, cold winter in the Appalachian Mountains.

Mostly growing near streams and in woodlands with partial shade, ramps are fairly easy to find.

We were lucky, though. We never had to go all the way into the woods for foraging, we have just had a patch that grew in our yard at the edge of a few hardwood trees. They actually still grow there today. I believe dad may have had something to do with transplanting a patch a few (hmmm, 25) years back.

But, among the first warm days each March and April, you’ll start to smell the sweet oniony smell when walking by the patch. A few more warm days and, all of a sudden, they’re ready to pick.

As with any wild plant, be sure to avoid overharvesting by spreading your selection throughout the patch.

Take a few leaves from the plant or use a sharp knife to cut about 1/3 of the bulb out above the root. The usually grow in rocky soil so it might be hard to get to the bulb so you can use a small pick or hoedag type tool. As the plant ages the bulb will get bigger and there is a “middle-point” where the flavor is just perfect.

The leaves are great and leaving some bulb/root will ensure the plant will grow back next year. Note, there are plants that look like ramps but don’t give off the distinctive odor. When in doubt, don’t eat it.

According to former Maryland State Park Ranger, Caroline Blizzard, “Ramps don’t grow in any Maryland State Parks, that I’m aware of, but they can be harvested responsibly in Maryland State Forests. It’s a picky plant habitat-wise and part of what makes them so illusive, fleeting and an amazing springtime tradition.”

For those of us with roots in Garrett County, it’s a normal passage of the seasons and a way to connect to the stories of our grandparents.

We usually eat ramps with eggs and fried potatoes. But, they can be made into spreads, frozen, added to salads, put on pizza or just eaten raw. 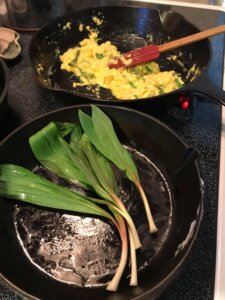 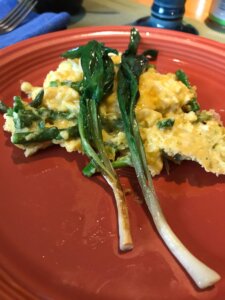 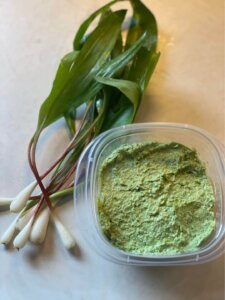 Morels are a certain kind of mushroom that is a bit more difficult than ramps to find but still an amazing springtime tradition in Appalachia. Morels are hollow and white inside and have a sort of honeycomb exterior. They are often under leaves and it takes a good eye to find.

Growing up we thought we were doing well if we could find a dozen in a few hours.

There are “tricks of the trade” for mushroom hunters to find morels, specifically; we look for elm trees and disturbed land such as a fire or fallen trees. Once you find one morel, others will be easier to locate.

About two days after a heavy warm rain, the morels will begin to pop up. To harvest them, once you find them, take a knife, and cut the stalk at the base. To ensure the morels are not overharvested, be patient for the morels to reach maturity.

Also, use a mesh bag to carry your haul so the spores will drop on the ground as you walk in the woods and maybe regrow.

Make sure you know exactly what mushrooms you are hunting, though, as there are poisonous lookalikes in the forest. When in doubt, don’t eat it.

According to the National Park Service, morels can be gathered by hand for personal use or consumption. The morel must be carefully cut at the base without damaging the mycelium (the underground portion of the mushroom). The Park limits a ½ gallon of mushroom species per person daily.

Some neighbors soak the mushrooms in salt water for a while to draw out the bugs before cooking. Morels fried in butter with or without potatoes is my favorite. Also, as a topping on pizza is so so good. 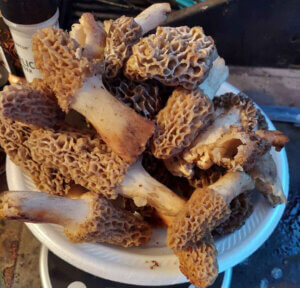 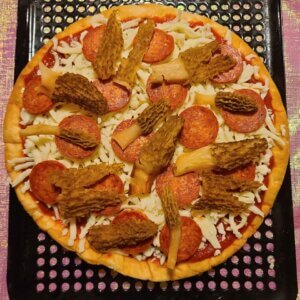