As the snow falls in Garrett County on this first day of Spring, I thought I would talk a little about Women’s History Month. I have seen a lot of stories, events and articles covering, celebrating and even “dissecting” this annual March fixture and wanted to add some thoughts. I have included the piece on the “Dinner Party” art exhibit currently at Garrett College because I think it sums up where we are as a society relative to celebrating women and their contributions, challenges and opportunities.

I think it is great that students of all backgrounds came together to make this Dinner Party exhibition a reality.  I think it even more important to recognize that while events, lectures and articles have occurred throughout the month in support of women, there is still a long way to go, and that working together we, as a global society, can continue to benefit from inclusiveness and understanding of all on this giant ball we call earth.

I recently read a New York Times piece that printed obituaries from the past of important, courageous and even famous women that never “qualified” to get their obituary in the Times when they passed. The Times hopes to rectify that by now printing “missed” obits in its future editions. A great idea.

Yet, even as we celebrate women this month, Money Magazine ran a great article on the female investment gap, estimating that it could reach one million dollars by age 65 for high earners. That estimate resulted from a complex analysis based on some serious assumptions, but to me it indicates there is obviously a significant problem that goes beyond mere salary parity. It will also have an impact on the economy and society with implications far beyond that of individual women and their families. So, think about March as being about women and all they have done and continue to do and perhaps, based on some past exclusions, consider March being about March Sadness and not just about March Madness on the basketball court. Below is the piece on the Dinner Party…

Garrett College’s Psychology of Women and American Association of University Women (AAUW) students recreated the Dinner Party, an iconic work by feminist artist Judy Chicago. Students created their own place settings featuring women and men who worked toward gender equality during each wave of the women’s movement.

The art exhibit opened on Monday, March 5 and will be open to the public through Friday, March 9th from 11 a.m. until 5 p.m., March 8-16 and March 26-29 in Room 620A on the McHenry campus of the College. For more information on the exhibit that is open to the general public, persons may contact Dr. Terry Kasecamp, Professor of Psychology, at 301-387-3005 or terry.kasecamp@garrettcollege.edu. 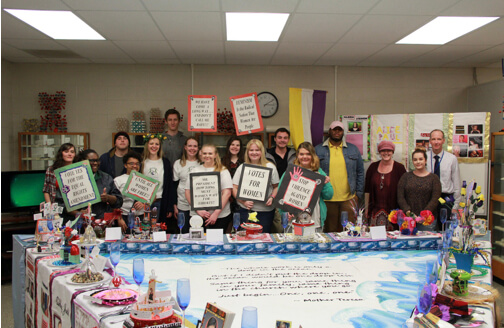