In spring of 2017, the Warriors of Wisp (W.O.W.) Team was conceived from a group of Wisp employees and friends with several goals; to foster and maintain a healthy lifestyle and fundraise for local community organizations.  The W.O.W. Team chose the Deep Creek Lake Lions Club as the benefactor for the RUN FOR IT 5K presented by the Tucker Community Foundation.  After five months of fundraising projects, including selling pepperoni rolls and movie tickets, the W.O.W. Team raised a total of $1,660 and in October 2017, they put months of training to the test at the RUN FOR IT 5K held in Davis, WV.  A check for $1,660 was presented to the Deep Creek Lake Lion’s Club on December 12, 2017 by members of the W.O.W. Team.

“We’ve had a lot of fun so far all while dedicating ourselves to healthier lifestyles, challenged ourselves, and raised money for a great cause. We’re just getting started,” said W.O.W. Team Captain Lisa Ratliff.  The W.O.W. team formed in May 2017 with the goal of participating in 5K races and debuted at the Tucker Community Foundation’s RUN FOR IT event held in Davis, WV in October and participated in a second event later that month.  The team is currently recruiting new members and making plans for 2018 with goals of participating in a 5k race every quarter, returning to RUN FOR IT, and holding another charity fundraiser. The W.O.W. Team plans to continue fundraising and participating in 5K races throughout 2018.

ABOUT DEEP CREEK LAKE LION’S CLUB Since 1925, Lions Clubs everywhere have been ‘knights of the blind in the crusade against darkness’ and for over three decades, the Deep Creek Lake Lions have done just that by bringing visually impaired children to the Deep Creek Lake area to enjoy recreation and activities throughout the seasons. During the winter, the students ski at Wisp Resort with the assistance of special equipment and local high school and adult volunteers. They also enjoy hearty breakfasts prepared by the Lions Club and pizza dinners where they trade stories from the slopes with the club members and each other. During the summer, the club sets up tents for the students at Deep Creek Lake State Park, where they spend the days tubing on the lake and the nights roasting marshmallows by the fire. Local attractions also donate their services to allow the students to experience the fun of the mountain coaster, bumper cars and go-carts. In addition to these programs, the Deep Creek Lake Lions Club also assists local vision-impaired citizens with eyeglasses and doctor bills and manages the community park on Bumble Bee Road. 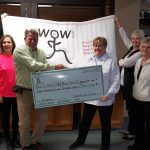