Yesterday was very rainy and warm.  Today’s weather will be cloudy, with a high near 56 and a low around 32. Change of rain mainly after 1pm and tonight between 1am and 5am. Winds could gust as high as 32 mph.

There are no Salmon in or around Deep Creek Lake, except maybe on the dinner table, but I really like the NOAA Fish News newsletter, which has lots of interesting stories on fisheries, habitat and restoration management, topics that definitely resonate with our readers. Fish News is celebrating the International Year of the Salmon in 2019 and they discuss that and a number other interesting topics in their latest issue, which you can find here.

Speaking of newsletters, this one by the Deep Creek Watershed Association covers topics a little closer to home.  Here it is.

The lake has been a source of a lot of fun over the last week or so since it has been frozen; Eric Williams grabbed this snap for us: 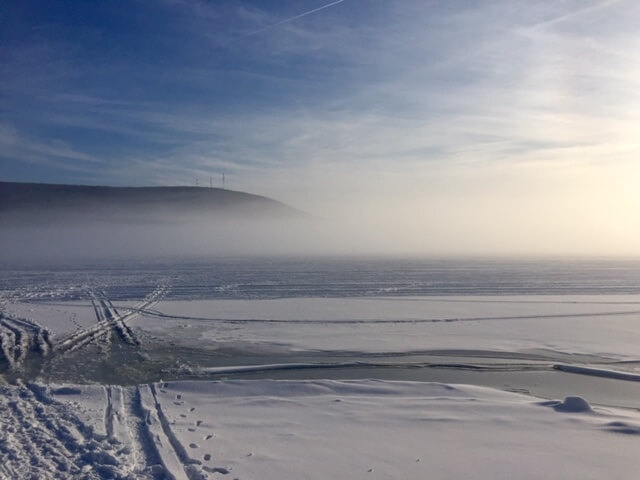 The Maryland Office of Tourism Development is planning to transform the Sideling Hill Rest Area (on I68) into a one-of-a-kind gateway attraction that promotes Maryland’s mountains, valleys and waterways, from the mountains near Frederick all the way west into Garrett County, with exhibits, programming and on-site transactional opportunities. They held a workshop on the topic on January 17th at Frostburg State University and are asking for further comments from the public.  Here’s a link to the notes from the workshop.  Public comment is open until April 15th.

You may have heard about the “Instagram Effect” relative to certain global tourist destinations. Basically, so many individuals go to a destination and utilize Instagram and other social media platforms to share their great experiences that the place becomes overrun with tourists seeking the same great experience.  While the Deep Creek Lake area provides many natural and even man-made experiences, I don’t think we have been affected in a negative way by social media.  Still, an interesting phenomenon I thought I would share.

Don’t know much about it, but I just heard Frostburg has declared this coming Saturday, February 9th, as “Sweetheart Saturday.” Downtown businesses will be offering discounts and promotions all day! I checked out a Facebook link for it and it was dated, so visit “at your own risk.” 🙂

The Maryland Department of Natural Resources puts out a brief news video every month.  It is called Access DNR and the February edition just came out.

February is Black History Month and Garrett College has two interesting speakers scheduled: Tristian Williams is speaking on February 21st at 3:00 pm in the auditorium.  The topic, “Is This America,” looks at the “history of race” in the US through the performer Childish Gambino.  Stephen Scott will be speaking on February 28th, also at 3:00 pm.  The topic is “Racism in Daily Conversation.”

At Potomac State University (which is about 45 minutes from the lake), The HBO documentary “King in the Wilderness” will be screened free to the campus and to the community on Monday, February 25th at 7:00 pm in their Davis Conference Center. This documentary, released last year, explores the rarely discussed last three years of Dr. King’s life, exploring his perspective on nonviolence and how it drew him into conflict with the Black Power movement, as well as his anti-Vietnam War stance. The trailer can be viewed on YouTube