After a rather rainy, cooler weekend, the weather for today will be more rain with a high near 65 and a low around 57. A flood watch is in effect until 12:15pm today.

As I write these Daily Notes, Florence has once again strengthened to hurricane strength and could pose a problem for the east coast. Please keep an eye on this storm, especially if you are travelling.

Garrett County Public Schools are on a two-hour delay this morning due to the widespread flooding.

The grand opening of the college’s new STEM building drew quite a crowd Saturday, with both of our US senators as well as regional and local dignitaries and many from the community present. This building is a really nice addition to our county. Here’s a photo of the new digital, 3-D dissection table being demonstrated. The only one in the state! 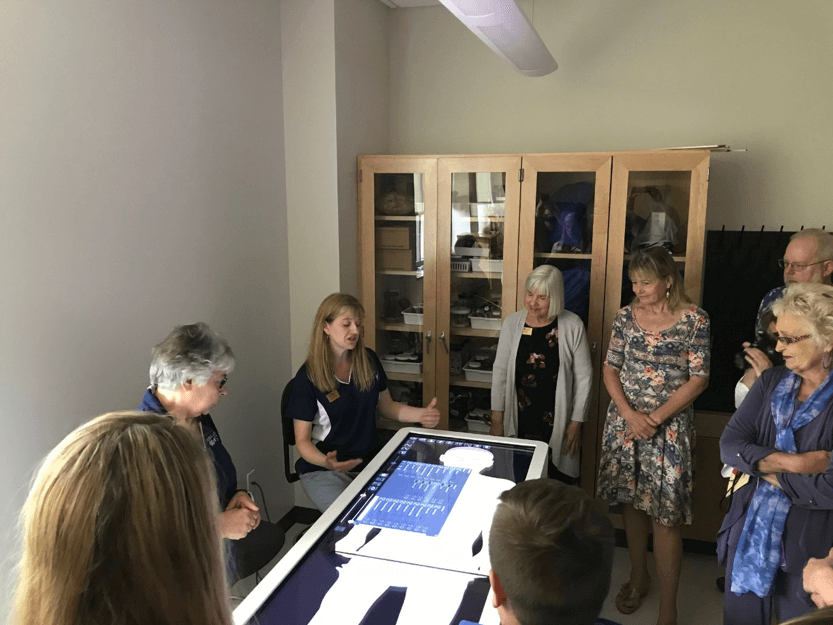 There was also quite a crowd at the Art, Beer & Wine Festival Saturday. I saw lots of engaged, happy faces as I served as Guest Pourer for one of the wineries.

On Friday, State Troopers responded to Meyersdale Road for a destruction of property complaint and found a 2013 Ford F150 truck that was severely damaged while the owner went four wheeling. The police ask anyone with information to contact the Maryland State Police McHenry Barracks at 301.387.1101.

Garrett County Department of Planning is hosting an open house this evening at the College from 4:00pm – 7:00pm. The session, “Thriving Population” will cover issues such as housing, population and the county’s services.

Are you related to “the missing link”? If you want to be sure, you can attend the “Find Your Ancestors” class at the Ruth Enlow Library Oakland branch this evening from 5:30pm -7:30pm? It’s free and will cover research methods, strategies and a Q&A with genealogical research experts.

Nearby, on the GAP Trail near mile marker 58, a large boulder and debris have fallen on to the trail; the trail is still passable. Somerset County crews are aware of the debris and are preparing tactics for removing the boulders this week.

We have posted a new Cover Story for September. The story was prepared by Brian Boal, CPA of Boal & Associates and covers some interesting, important tax law changes that will impact 2018 tax filings. I know it’s only September but he says not to wait until 2019 to understand and account for the changes.

Did you know that Washington College in Chestertown was the first college in Maryland? Founded in 1782 under the patronage of George Washington, it was also the first college chartered in the new nation. That little “tid-bit” of information comes to us from Governor Hogan, who wishes all students a successful year.

This video from Allegany Mountains Weather on Facebook shows the Casselman River in Grantsville overflowing its banks:

On a more restrained note, please take a moment today and tomorrow to remember all of those that perished in the attacks on 9/11. Doesn’t seem like 17 years ago.  While time heals, we should never forget.