Following yesterday’s snowy, blustery day, the weather for today will be mostly sunny with highs around 40. It will be a little windy at times with gusts up to 35mph this morning.

The snow plan for Garrett County went into effect last night at 8:30pm for the entire county.

And, speaking of snow, The Wisp fired-up their snow making “guns” late Sunday afternoon. Check out their website for updates, photos and info on all that’s going on with their snowmaking efforts.

Moving in from the cold, Deep Creek Times’ own Sarah Myers, along with Jessica Fike, are holding the first-ever “HABco Morning Mojo” this morning from 7:30am-9:00am. So, get out of your PJs right now (you know who you are) and head on over to 1272 Friendsville Road for this fun morning meet-up.

Back outside for a second: Thanks to Suzie Crawford for this cool photo of a rainbow she snapped Saturday morning about 7:00am at the Hazelhurst section of the lake. Really nice how it reflects on the lake. Thanks Suzie… 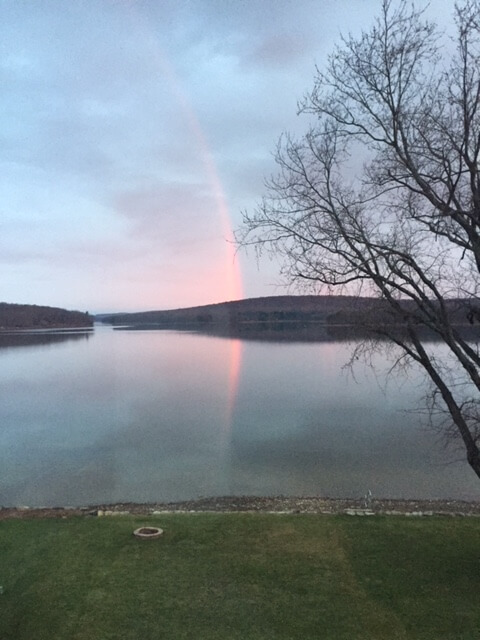 The Chamber of Commerce is holding its November Business Before Hours tomorrow Tuesday, November 21 starting at 8:00am. It’s the annual Tourism Update with a presentation by Andreas Weissenborn, Director of Research & Analytics with the Destinations International Foundation.

Feeling outnumbered? In beautiful Garrett County we humans have a right to feel in the minority. Your intrepid blogger/researcher finds that there are about 3.04 trillion trees on the planet as indicated by a 2015 research study. That’s over 400 living trees for every human on earth, and the ratio is probably higher in Garrett County!

According to the Garrett County Chamber, The National Defense Authorization Act of 2018 (NDAA) has recently passed both the House and the Senate and is on its way to the President’s desk. The NDAA includes important changes to the HUBZone program such as a freeze on HUBZone maps until January 1, 2020 and a 5-year map update transition after 2020. Several Garrett County businesses currently rely on the HUBZone program.