The weekend was just about perfect weather-wise, with the thermometer at my home registering 86 degrees yesterday. Today we have a slight chance of showers before noon. Mostly cloudy, then gradually becoming sunny, with a high near 81. West wind around 7 mph. Tonight will be partly cloudy, with a low around 64.

While rain has been somewhat scarce lately, we have been treated to some interesting summer cloud formations. Here’s a photo taken Friday afternoon showing the fluffy lower clouds and the higher cirrus (I think) whispy clouds. We tood this from the car on Chestnut Ridge Road. 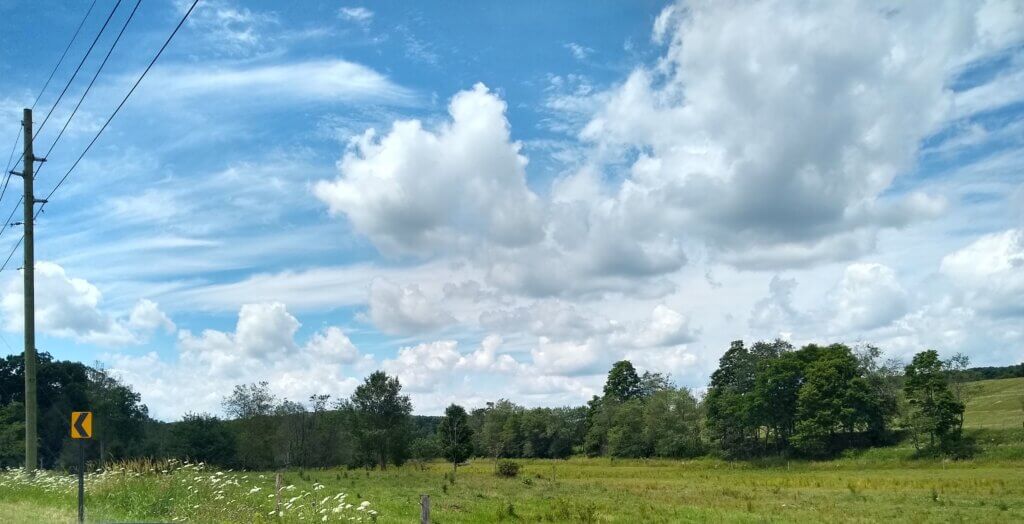 The lake was crowded over the weekend and I heard there were some fender benders and accidents on the roads, so please be especially careful, as we are in peak season. As a contrast to the busy roads, here’s a serene scene as submitted by Ed O’Connor showing a very early morning at the lake. Thanks Ed.

Early Morning at the Lake

I heard over the weekend that Manor Steakhouse in Oakland has closed.  Not sure of the exact situation (and hopefully it is not permanent) and will let readers know when we hear more.  I also heard that Festival of Trees has been cancelled.  Frankly, I am concerned about our small businesses as well as our non-profits that benefit from some of our wonderful events.

Here’s a link to the latest newsletter update from State Superintendent of Schools Karen B. Salmon.  There are embedded links to a number of previously reported items, including the reopening matrix.  Note there are also special grants available to schools and groups submitting projects that work to help students succeed during these challenging learning times. Lots of information.

The third of four Deep Creek Lake hydrilla herbicide treatments is scheduled to take place on Tuesday. During the treatment process, boaters are asked to stay clear of the treatment boat so that the proper dosage can be administered. Once applied, there are no recreational restrictions associated with the herbicide. Dive teams will also be on the lake periodically throughout the summer, with divers in the water monitoring the hydrilla emergence and response to the herbicide. If you see red and white dive flags, please stay at least 100 feet away as divers are in the water.

Ever wonder about how “Dan’s Mountain” got its name?  Well, according to some material posted on  Feldstein’s Historical Stuff (thanks, as always, Al), here’s some insight:
“As the story goes, one day Daniel Cresap (1728-1798) and the famed Native American guide and hereditary Chief of the Delaware Nation, Nemacolin, were hunting bear. They treed some bear cubs and as Daniel climbed after them a limb broke and he fell to the rocks below, breaking several bones and becoming unconscious. Nemacolin transported Daniel home on a litter. The ridge where he fell became known as ‘Dan’s Rock.’ Years later, Daniel was pursuing another on that mountain. Both shot at each other simultaneously, and both were mortally wounded. The mountain henceforth became known as, ‘Dan’s Mountain.’ Daniel had also been a son of the famous Colonel Thomas Cresap.” Some history to consider the next time you pass the sign for Dan’s Mountain on the highway!
Have a great Monday folks….