Recently, I sat down for lunch with some new friends to find out about how, 35 years ago, a great tradition began. In 1982, David Eichelberger, his brother and “some” friends found their way to Deep Creek Lake for a guys-only fishing trip. 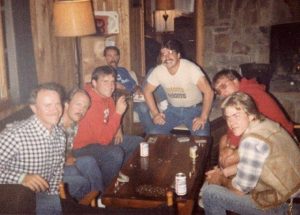 Back when Deep Creek Lake was “Maryland’s Best Kept Secret” and there were no large mountain homes and just a few stores, the guys rented a tiny cabin near the State Park and fished all week for bass, walleye, northern pike, crappie, yellow perch, and others. This adventure had the perfect company and unspoiled fishing, so the men made a pact to come back to Deep Creek Lake.

Maybe, some say, there was a beer or bourbon or two involved.

Over the course of that first week and formalized over the first few years, a friendly fishing tournament evolved as the “Brothers and Friends Challenge”. In just a few short years thereafter, the contest to catch the biggest fish was updated to simply the “Brothers Challenge”.

The core group, Drew “Big Fella” Eichelberger, David “Ike” Eichelberger, Drew “Dox” Doxzon, Andy “Mot” Motsko, Chuck “Chucky” Motsko, Edmund “Nebbie” McFadden, and Michael “Slick” McFadden, continue their traditions. It is an established rule that a member is only allowed to miss the annual trip for one of two reasons: death or birth. Even if one of the two reasons apply, you should attempt to get to DCL as soon as possible.

Back in the day, the trip began by arriving at Deep Creek Lake and purchasing 75 dozen minnows from Johnny Marple (of Johnny’s Baithouse fame). 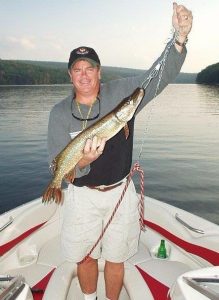 “We love Johnny and I think he loves us,” said Ike. In 1988, the tournament was official with the brothers creating their own unique t-shirt or hat for each year’s contest. I was impressed that Johnny was able to make it to the luncheon with Deep Creek Times just a few weeks ago and he wore his 1999 edition “Challenge” hat. It was an awesome gesture to celebrate the brothers.

Over the decades, the specific rules and the significance of the challenge have evolved a bit as “Biggest Fish” was measured with official scales at Johnny’s Baithouse until the Baithouse was sold about 15 years ago. (And, rumor is that Johnny stuck his foot on the scale a few times to favor “The Big Fella”…)

Now that the Baithouse is closed, Dox has a scale on his boat and he takes the official measurements. Some specifics of the tournament are:

Through the years, Mickey has earned the title of the “Biggest All-Time Fish”: a 7.5lb northern pike. Other members of the group have earned other titles through the years such as the
“Smartest” (Chuck) and “Crabbiest” (Dox). 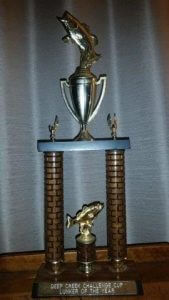 Unfortunately, Mot is the only member to have earned “Not-Won-the-Tournament-Yet” title. Ike attributes this to him being the last one out on the lake most days. Thatâ€™s ok though,
Mot truly loves Garrett County and had a home here for a time. Also, his sonâ€™s name is Garrett!

With brothers as fun, comical and upbeat as this group, there is never a dull moment. Practical jokes, pranks and general shenanigans make the week memorable and create camaraderie. Not to mention, this group has collected hundreds of hilarious stories to share.

The brothers are also happy to report that there have only been two emergency room visits so far. “Not counting the hair emergency,” says Andy. A round of laughter rolls around the table again.

Every late September to early October, you can find this group and their three boats cruising the waters of DCL. Not much has changed since those early days but, according to Ike, “we’re
maybe getting on the water a bit later and turning in for the night a bit earlier”.

We laughed and laughed as the boys and Johnny told old tales and it was a great lunch. I was so happy to meet this group, delighted that they love Deep Creek Lake as much as I do and I can’t wait to toast the 2018 “Brothers Challenge” winner!