For the sixth straight year, Woodlake Tree Farm was the pick-up site for the annual Trees for Troops program in Maryland Nov. 27. More than 50 donated Fraser Christmas trees from local tree growers were transported – courtesy of FedEx Corporation – to Fort Bragg, North Carolina during Trees for Troops weekend, Dec. 1-3, according to Ann O’Connor, coordinator of the effort for the Christmas Spirit Foundation. 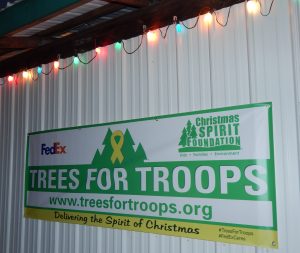 In addition to the Garrett County free trees, Fort Bragg was scheduled to receive hundreds of other donated Christmas trees from other parts of the country. All told, under the Trees for Troops initiative, some 17,000 trees were headed to 65 bases in 17 countries this holiday season.

The Garrett County tree farmers are all members of the Maryland Christmas Tree Association, for which Taylor Sines volunteers as a board member. Across the state, about 75 tree farms belong to the organization, which promotes growing and marketing real Christmas trees.

FedEx partners with the Christmas SPIRIT Foundation, the charitable arm of the National Christmas Tree Association. This fall, the Trees for Troops effort was the recipient of the 2017 Spirit of Hope Award at a ceremony at the Pentagon. Established in 1997, the award is named for comedian and actor Bob Hope and recognizes civilians and organizations that epitomize Hope’s values of patriotism, loyalty, freedom and dedication.

“The Trees for Troops program is about more than just delivering trees – we are delivering a piece of the Christmas spirit to our U.S.military and their families,” said Mike Ducker, president and CEO of FedEx Freight. “To be able to say we’ve helped bring more than 200,000 trees (in 13 years) to so many of our heroes is an honor, and it shows our appreciation for the sacrifice these men and women and their families have made for our country.”