The weather for today will be periods of rain showers all day and most of the evening. A high of 50 and a low of 46 degrees and could get windy.

Tonight is the Spirit Night at Oakland McDonald’s where a portion of sales go to support Garrett County FIRST LEGO League robotics team at the FLL Razorback Invitational at the University of Arkansas in May. From 5:00-8:00pm.

Don’t forget that starting at 9:00am today, CSX will be conducting maintenance at the railroad crossing on Fricks Road, with the expected closure being for three days, dependent on weather and train traffic.

Heard the Reptile Wonders workshops at the Ruth Enlow Library went very well.  I have included a photo they sent us.  That’s looks like a really big garden snake to me… 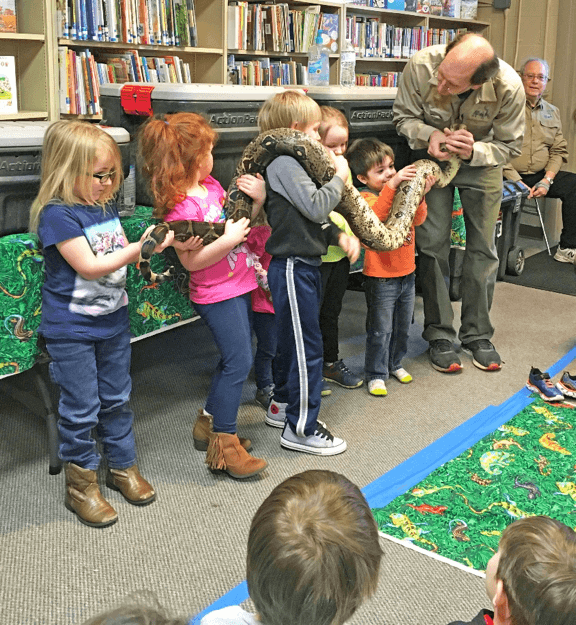 GOBA’s annual meeting is planned for June 19th at 6:00pm.  They are accepting awards for the Asa McCain Sprit of Oakland award and also for two soon-to-open board positions.

New Germany State Park has announced the schedule for the ninth season of free “Old Time Jams” celebrating Appalachian music on Friday evening over the summer.  They have also scheduled a number of free performances by Greg Latta. Thanks, New Germany!

Just in case you want to get away for a day or two in May during the royal wedding, the Royal Lancaster hotel in London is offering a taste of royal life. The stately package includes an overnight stay in the hotel’s Royal Suite, with panoramic views over Hyde Park and the London skyline.  All for about $5,000/night, not including airfare! I think I’ll be staying at the lake enjoying the mountain air….