Yesterday was nice, but with some thunderstorms in the area.  Today starts with a chance for showers, then showers and thunderstorms likely after noon. Partly sunny, with a high near 79 degrees and a low of about 59. There will be a south wind 7 to 10 mph and a chance of precipitation of 60%.

I know things are a bit “off” due the coronavirus and self isolation/working from home, but it seems like the end of June just crept up on me here. I am going to take a breath and smell the wild roses I think!

Somewhere over the fogbow… Here’s a very cool photo taken by Charles Walch yesterday morning. It is a photo of a fogbow, sometimes referred to as a white rainbow.  As you would expect from the name, it occurs in foggy weather and is a much rarer phenomena than a rainbow.  Thanks Charles and here’s the photo he took: 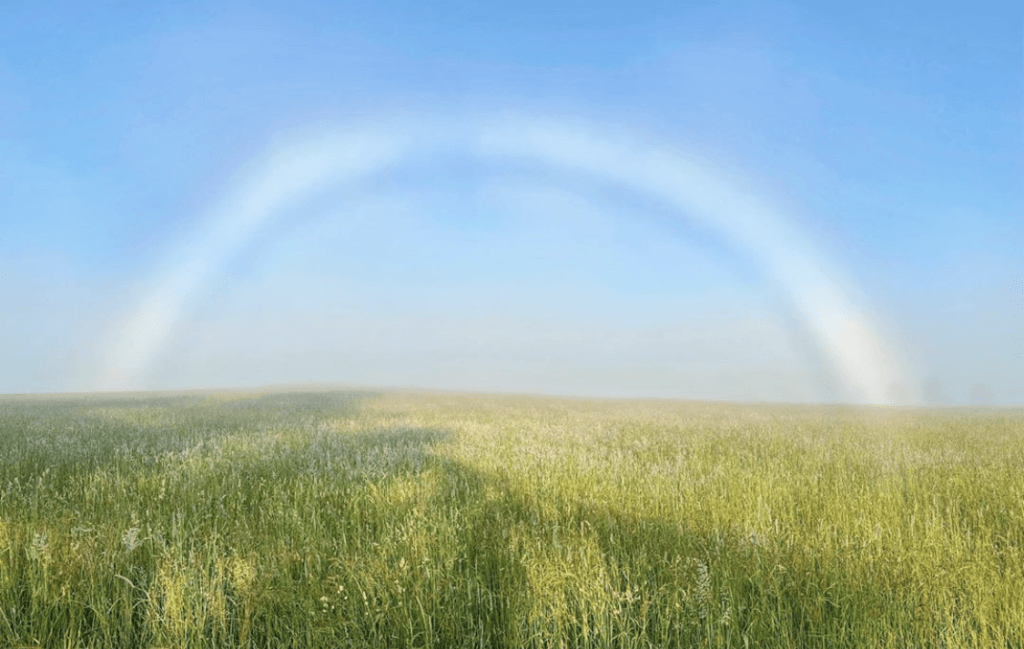 In addition to the COVID-19 testing scheduled for this Friday, the Garrett County Health Department  has announced a second testing opportunity (also for thoe without symptoms) to be held at the Mountain Laurel Medical Center at 1027 Memorial Drive in Oakland on Friday, July 17th from 7:00 am to 1:00 pm. More information will be forthcoming closer to that date.

Yesterday the state of Maryland reported 297 new COVID-19 cases with eight new deaths.  I believe that brings totals for the pandemic in Maryland to 64,656 and 3,060 for cases and deaths, respectively.  While some parts of the country are seeing large increases, we in Maryland are holding fairly steady, with Garrett County one of the lowest counties in the state.

This is interesting and a little different as we get ready for July 4th.  To determine where Americans have the most red, white and blue pride, WalletHub recently compared the 50 states across 13 key indicators of patriotism. Their data set ranged from the state’s military enlistees and veterans to the share of adults who voted in the 2016 presidential election to AmeriCorps volunteers per capita. Here’s some key facts from the full report, where you can also see an interactive map and find where Maryland and other states ranked overall (we did well):

Patriotism in Maryland (1=Most Patriotic; 25=Avg)