Really interesting weather weekend: Rainy and warmer Friday, then cool with snow accumulations on Saturday, then it seemed to be warming again Sunday night. Today will be rainy with a high of 59 degrees and a low of 50 degrees.

Happy Presidents Day 2018. Originally established in 1885 in recognition of President George Washington, it is still officially called “Washington’s Birthday” by the federal government. It became the third Monday in February in 1971.

This week is National FFA week — Northern Garrett FFA students have planned the following: Monday some students will be at tractor supply in Oakland selling paper emblems to support future FFA projects. Tuesday is camo day at school and the chapter officers are traveling to Annapolis to the general session. Wednesday is hat day. Thursday is FFA color day. Friday is flannel Friday and ice cream on lunch shifts.

The Board of County Commissioners will be holding their second February meeting tomorrow afternoon at 3:00pm at the County Court House.

Garrett College’s Bee Keeping class has been moved from tomorrow until February 27th, so there’s still time to register. Call 301.387.3069 for more information.

The Maryland Department of natural resources announced that over 86 thousand dear were harvested statewide during the 17/18 hunting season. The DNR provides a detailed county-by-county breakdown for those interested.

The Ruth Enlow Library will host a class on Bullet Journaling: Doing It Your Way, on Wednesday, March 21st at 6:00pm at the Oakland Library. This class will show participants how to organize their lives with a technique called bullet journaling. Contact Bonnie at 301-334-3996, ext. 0117 or bonnie@relib.net to register.

Here is an interesting opportunity: Outgoing and athletic men and women ages 18 and older who are interested in serving as ballboys and ballgirls for the Baltimore Orioles baseball team during the upcoming 2018 season are invited to try out for a position at Oriole Park beginning at noon on March 3.

Northern Middle School was among the top 48 teams in the region to be represented at the Maryland State FIRST Tech Challenge Championship over the weekend at UMBC in Catonsville. Special thanks to Doug Beitzel for these photos of his daughter Jasmine’s FTC Team 13405 mid-competition. 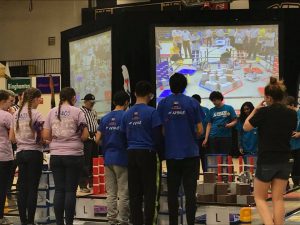