“So said President Theodore Roosevelt of the education movement known as Chautauqua. The origins of Chautauqua (pronounced “Shuh-TAW-Kwa”) can be found in the Chautauqua Lake area of southwestern New York State, where the movement began in 1874. Initially organized by Methodist minister John Heyl Vincent and businessman Lewis Miller as a Methodist summer retreat, Chautauqua quickly grew to be a popular source of adult education as the lectures presented the latest thinking in politics, economics, literature, science, and religion. 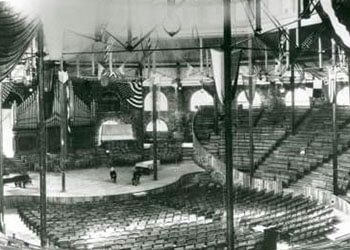 By 1900, more than 400 summer communities had developed from the original Chautauqua model, and touring companies presented lectures, debates, and performances at sites throughout the country. However, the growing popularity of radios, movies, and cars in the early twentieth century led to the gradual decline in the Chautauqua movement.

In Maryland, where the tradition dates back to the late nineteenth century when Chautauquas took place at Mountain Lake Park in Garrett County and at Glen Echo Park in Montgomery County, Maryland Humanities launched the modern Chautauqua in 1995 at Garrett College. Since then, this popular program has spread to other parts of the state, educating and entertaining thousands of Marylanders every summer.” (from the Maryland Humanities website). 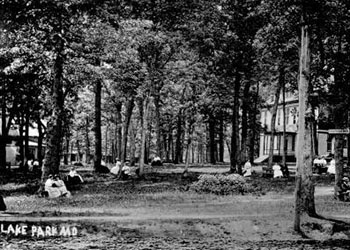 Courtesy of the Maryland State Archives

GLAF (Garrett Lakes Arts Festival), Garrett College, and Maryland Humanities worked together in 1995 to restart Maryland Chautauqua. To celebrate the upcoming 25th modern day Maryland Chautauqua, GLAF, with help from a grant from the Maryland Historical Trust, will be returning to historic Mountain Lake Park July 5-7, 2019, with a three-day re-creation of Maryland’s early Chautauqua events.

This three-day celebration of the original Maryland Chautauqua will include a schedule of daily lectures, historical re-enactments, musical presentations, and more. Re-enactors of notable historical figures from those earlier Chautauqua years will also be on hand to celebrate our return to earlier times. A special addition to this program will be the opportunity for participants to share their own personal stories and connections to the development of Mountain Lake Park and the Chautauqua influence.

While the daytime schedule will focus on re-creating and commemorating some of the earlier Chautauqua programs, the regular program for the 2019 Maryland Humanities Chautauqua presented by GLAF will continue to be scheduled as evening performances, and those will also be held in Mountain Lake Park.  The Chautauquas were restarted in 1976 in North Dakota as a humanities program, incorporating the now-standard format of a monologue by a scholar/re-creator acting as a historical character, then interacting with the audience while still in-character, and then coming out of character to answer audience questions as a modern scholar. The Maryland Humanities Council restarted the Maryland Chautauqua at Garrett College in 1995 through the efforts of Steve Herman, former President of Garrett College, and was the only site in Maryland until 1999, when it began at Montgomery College. Presented through GLAF (Garrett Lakes Arts Festival), the Garrett County Chautauqua remains one of the highest attended venues in the Maryland Humanities Chautauqua line-up.

Garrett County has remained a leader of the Chautauqua Movement in Maryland, both in its nineteenth-century origins and in its modern resurgence.In July 2019, this small town in Garrett County hopes to recapture the magic and history of those first years.