We have a support ticket with our tech team for this! 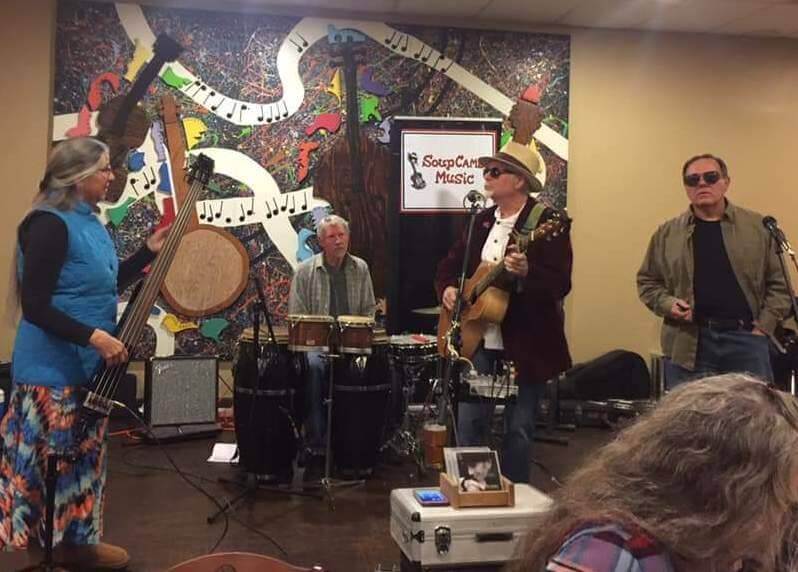 CANCELED!!!  Soup Camel Music has played at MoonShadow several times and always puts on a great show! SOUP CAMEL is an amazing songwriter and his band knows how to have fun. These guys are true entertainers!

Soup Camel has been playing guitar and singing since he was 13. He grew up in a small town in NJ in the 50′ and 60’s and was influenced by ALL the music of that era including his Dad’s Pete Foutain records, his Mom’s Broadway Musical records and even Lawrence Welk. His life has been a long muscial journey which has settled into the sounds of early American Blues and Jazz (ca. 1900-1940). He loves to sing, he loves to play guitar, and he aint afraid to yodel.
Kimberlee Thorne has been involved in music since the day she was born. Her father, Henry Thorne, was the band director at Rivesville High School in Rivesville, WV. She has played music and sung all over the country and has many credits to her name including a stint in Nashville at Opryland.
Motown Minnie has been around music since High School and was married to well-known luthier, Gilbert Stiles. Gilbert was the one who got her interested in the bass and bought her Ruby Red, a 1930’s Kay bass.
Alan Martin, aka the Beat Doctor, retired from Soup Camel Music on October 24, 2015. Regretfully, our brother Alan, passed on in August of 2016. We miss him dearly.
David Insley, otherwise known as Delta Dave has been playing harmonica for years but is also a virtuoso on the clarinet. His early clarinet days included a stint in the Baltimore Colts Marching Band.
Chris Matthews, the youngest member of the group, has been involved in music most of his life and can play many different instruments but his fiddle-playing is what we like most. He rounds out the group and gives Soup Camel Music that “Americana” flavor.

Submit Your Event for Approval Here: